Are all copywriters this obsessive?

I’m obsessive. And a little extreme.  In most things, it’s all or nothing. I don’t know if it’s because my dad always said, “If it’s worth doing it’s worth doing properly”, but that’s certainly how I look at things.

Actually, now that I think about it, I’m pretty sure it’s not because he said that. Because he also used to say, “A job that’s worth sitting down to do isn’t worth doing.” Hmmm…

In either case, I’m interested to know. Are all copywriters this obsessive? Or am I just as strange as my wife thinks I am?

Do you do these sorts of things…?

This just happened. It’s what prompted me to write this post.

Our kettle is an automatic electric one. Nothing special, but when it boils, it turns itself off. It also turns itself off when you take it off the base, even if it hasn’t finished boiling.

Sometimes when I’m making a cuppa, I get impatient, and I take the kettle off its base before it’s technically finished boiling. (It’s boiling, but it’s still heating.)

But before I take it off, I always manually turn it off, even though I know it’ll automatically turn itself off when it leaves the base. Can’t help myself.

I love technology. This post is just the start: 33 software tools for freelance copywriters. If you follow me on Google+, you’ll know I often post about Android apps, operating systems, Windows programs, games and various other tech stuff.

But it’s an unhealthy kind of love.

Take my task and event apps, for instance. I use Remember The Milk for tasks and Google Calendar for appointments. The combination works well. The distinction for me (yes I have a clear distinction!) is that if I have to do something at a particular time (e.g. it’s an appointment with someone) it goes in Google Calendar. Everything else is just stuff I have to do today, preferably at around the time suggested. (e.g. “Finish Ian’s copy today” or “Take the bins out at 8pm”.) It can all go in Remember The Milk.

This makes sense to me, but it’s more than just a logical thing. I like ticking things off my list. And as I tend to have more general tasks than appointments, I end up with far more things in Remember The Milk than in Google Calendar. And it’s a checklist, not just a calendar layout, so I get to satisfy my ticking fetish.

But that’s not even the worst of it. For a while there, I became obsessed with combining both appointments and tasks into one app. (Indeed, I used to have them all in Remember The Milk, but I didn’t like that it had no calendar view, and also that I couldn’t share events with my wife.) I remember Sharon and I had a kid-free day once, and we went down to the Haven at Terrigal and had a picnic in the sun. I spent most of the day stressing about which app to choose. It even made me hyperventilate a bit (that’s my anxiety symptom).

Of course, despite hours of searching and testing, I couldn’t find anything to fit the bill, so I decided to create my own. I mean COME ON! Why can’t Remember The Milk have a shareable calendar view too? (Unfortunately, my business partner doesn’t share my obsession, and he wasn’t interested in building the app. If you want to build it, please let me know!) 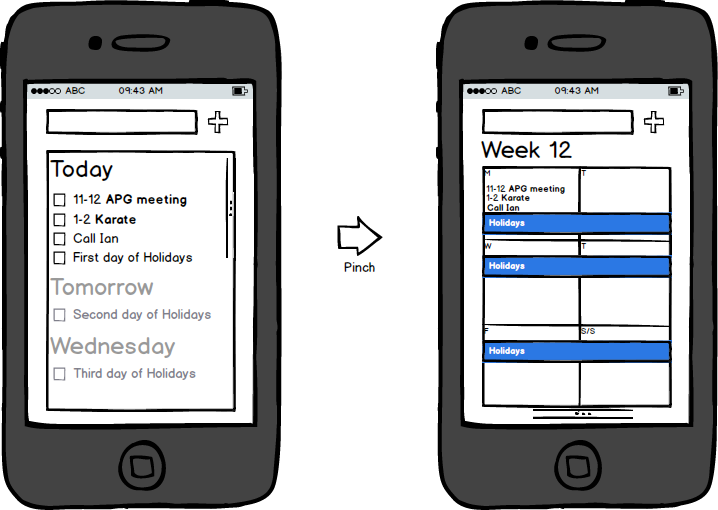 (Also note that when I went to insert the above image into this post, I noticed that the last item in the checklist on the left said “Second day of Holidays” when it should have said “Third day of Holidays”. So I actually opened Balsamiq, fixed it and overwrote the image file before uploading. Did that little mistake really matter? No! But in my brain it was COMPLETELY UNACCEPTABLE!)

Eventually I gave up on the idea of combining tasks and appointments (that resignation killed me), and I settled on having them in different places.

But not before I set Sharon up with Google calendar and all sorts of fancy syncing apps because she’s on an iPhone and it didn’t work the way I wanted it to.

She still uses her wall calendar. :-\

I have a ticking fetish

As I mentioned above, I have a ticking fetish. (Get your mind out of the gutter. I said TICKing, not TICKLing. I HATE being tickled!)

Ticking off my tasks in Remember The Milk gives me an inordinate amount of satisfaction. Sure, I know there’s a bit of that in everyone, but something tells me I take it to the limit.

For instance, I use Google Keep checklists to track what I need to upgrade in Clash of Clans, and in what order. One checklist for each town hall level.  (Disclaimer: I made myself stop doing this because it’s just a game. Right? RIGHT?!)

Here’s an example of one of my CoC checklists: 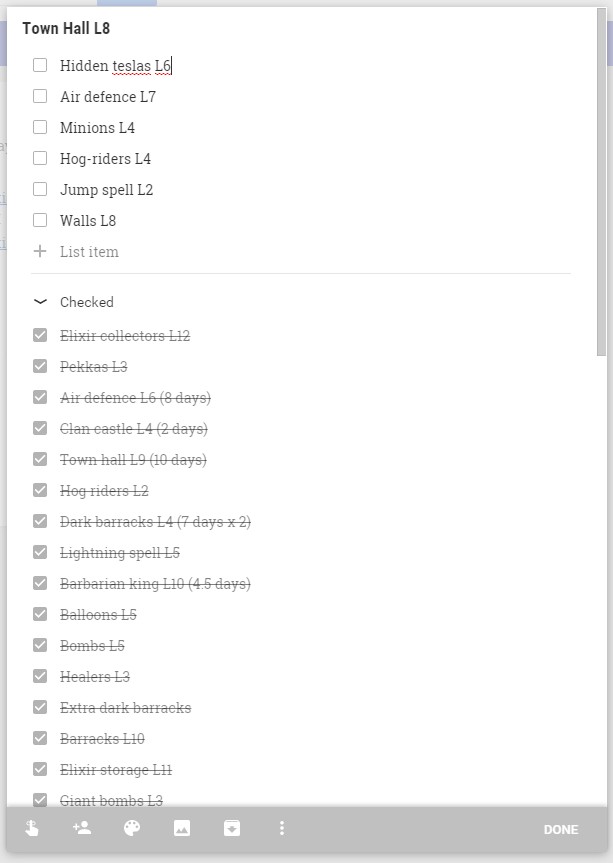 Talking of taking it to the limit

Nothing obsessive there I know. Except for the Evernote thing. So let me expand…

I read an article once about how humans have this tendency to try to separate themselves from experiences, because that gives them the feeling they’re bigger, more important than what happens to them.

So if you taste a nice wine, you might just enjoy it, but you’ll probably also think about how you’re enjoying it. Because if you have an enjoyable experience and simultaneously reflect on that experience, you feel as if you’re above it. Somehow more than it. That there’s some overarching value to you other than your immediate sensory experiences.

But the article said the truth is there’s no real difference between the two. The enjoyment and the reflection on the enjoyment are both just experiences. And they don’t happen in parallel. That’s impossible. Although you may not notice it, they actually happen in series. So you might be just enjoying it one moment, then you might think about how you’re enjoying it, then you might just enjoy it again, and so on.

Tragically, this insight into human nature has ruined my favourite part of my favourite song by my favourite band. For some reason, I must have chosen my enjoyment of Randy’s high note as my own personal example to make sense of the article. Now, whenever I hear that soaring note at the end of Take it to the Limit, my brain flits madly, moth-like, between the enjoyment and the reflection on the enjoyment.

My brother-in-law understands this. My wife just thinks I’m crazy.

I could go on…

I fix copy even when clients are happy with it

Yesterday a client signed off on a headline. And it’d been a long time coming, because her brief was terrible.

I could have (should have?) just cheered for joy and moved on with the rest of the job, but I wasn’t happy with it, so I raised my concerns with her, and suggested some alternatives. Then more again this morning.

She’ll end up with a great headline (maybe I should add this spiel to my copywriting sales page), but I’ll have spent hours more on the job than I allowed. Not good when you’re working to a fixed price!

Are you this obsessive?

This is all just the tip of the iceberg. I was up til 1am this morning, testing the SwiftKey Android keyboard. For the 5th time. (Swype is still better. ;-) Last week it was photo apps. I have ALL our photos saved to Flickr, and ALL arranged into albums (one for each kid, one for Sharon, one for me, one for my favourites, one for our camping trip earlier this year…). All new photos auto-upload from all our mobile devices to a single Flickr account and sit in a folder awaiting categorisation. And I have a Remember The Milk reminder once a month telling me to categorise them! I use QuickPic to display these albums (not the Flickr app) because it lets me change the sort order, which means I can choose to see baby photos first or photos taken yesterday. I spent hours last weekend testing whether the new Google Photos is as good as Flickr for all this stuff. (It’s not.)

In fact, as you can probably tell, it’s killing me that I don’t have time to continue with this list. But you get the idea.

Are all copywriters this obsessive? Are you? Or is it just me? Please comment…