I’m obsessive about many things. From finding exactly the right phrasing for a job to upgrading everything in exactly right order in Clash of Clans.

But I’m particularly obsessive about facts.

As a freelance copywriter, I have to write about something new every day. And to do that credibly, I have to learn a lot. So facts are critical to my livelihood.

They’re also critical to who I am. In general life, I like to base my opinions and beliefs on evidence, and I was taught to always challenge ‘conventional wisdom’. So I do a lot of research and digest a lot of facts.

So I’m also obsessive about my notes

Unfortunately, I find facts very hard to retain – or at least recall. Sure, I remember the guts, but when I’m writing (or I’m questioned), I like to be able to rattle off the details. Statistics, research findings, quotes, laws, policies, dates, names, actions – that sort of thing. And it seems my brain just isn’t big enough to do that. (You wouldn’t guess it from my inhumanly large noggin, but it’s true.)

So instead of trying to remember every last detail of everything I’ve ever researched, I take notes. I summarise logic, add my own comments and thoughts, take photos and screenshots, paste quotes, clip web pages and so on. Eventually I even create collections of notes around ideas and issues.

So in addition to phrasing, Clash of Clans and facts, I’m also obsessive about my notes.

But I’ve struggled to find a good notes app

What does a geeky, notes-obsessed copywriter use to record notes that he feels are akin to part of his brain? That’s the very question I’ve been struggling to answer for many years.

In the old, old days, I used a paper notebook. If you’ve ever seen my handwriting, you’ll know why that was a lost cause.

Then, as the social age kicked off, I moved on to del.icio.us. That was fine and dandy for a while, but eventually, I got sick of worrying about whether my notes were public or private. (The default was public, and most of mine were private.)

I used Evernote for years, but we didn’t get along

In 2008, I switched to Evernote. I exported all my del.icio.us notes and imported them into Evernote in one fell swoop, tags and all. And I’ve been merrily using Evernote ever since.

Unfortunately, however, it seems I was using it a little too merrily… I’d amassed more than 9,500 notes, and I’d tagged almost none of them. I’d always thought Evernote’s keyword search was great, but it was now returning all sorts of irrelevant stuff every time I searched.

On top of that, Evernote’s web application was very slow on my Chromebook, and its usability across the board was (and is) a bit clunky. For example, sometimes it’s really hard to add text to a clipped article, articles shared directly from Pocket are saved without the original URL, and on mobile you can’t just tap to edit a note.)

So I switched to Google Keep

I’d been using Google Keep for quick, temporary notes because it was blindingly fast, pretty, and very easy to use. I loved it.

In fact, I’d been starting to consider it as a genuine alternative to Evernote. Perhaps even an improvement, given Google’s search chops. So when Google finally released a web clipper Chrome extension, I decided to really put it through its paces as a fully-fledged note-keeping tool.

It was everything I’d hoped for.

I copied a handful of notes across from Evernote, complete with images, URLs, text, etc., and it was an absolute pleasure to use, across all my devices. It loaded fast, searched fast and bookmarked fast, and finally, editing notes was easy.

So I decided to bite the bullet and make the switch.

Unfortunately Evernote is a walled garden, though, so I couldn’t just export all my notes and automagically import them into Keep. I had to do it manually.

“That’s ok,” I thought. “It’ll give me a chance to tidy up and consolidate my notes, anyway.” So off I went. Notes I’d created in Evernote, I copy-pasted to Keep. Notes I’d clipped to Evernote from the web, I re-clipped to Keep. It was slow, but very satisfying.

Google Keep had slowed to a near-standstill. On mobile, it took 10-20 seconds to start up, and on any device, I had to wait minutes before searching, otherwise the search results would be incomplete or completely empty!

Not happy, Jan. I still had more than 8,000 notes to go; there was no way this was going to work out. It was back to the drawing board.

So I went back to Evernote – and used it more smarterer

Naturally I’d already researched Evernote alternatives, but I decided to research them one last time. Just to be sure. Sadly, nothing fit the bill. So I came slinking back to Evernote with my tail between my legs.

But I also came back with some ideas…

Having seen how badly Google Keep’s performance deteriorated as my note count grew, I thought maybe Evernote’s would improve if I reduced my note count.

Fortunately, I had a lot of very old and outdated notes in Evernote, including notes about SEO and technology from way back in my del.icio.us days, pre-2008! So I could reduce my note count very quickly. I canned all these outdated notes instantly, along with many others. I now have only 3,497 notes (down from ~9,500), and Evernote’s now noticeably faster on my Chromebook.

I also came back to Evernote having discovered I’d often clipped web articles incorrectly with Chrome’s Clip to Evernote extension.

Whenever I wanted to clip an entire article with all it’s formatting and visual elements (as opposed to just a bookmark or a simplified article), I was using clip Full Page. But this clips the comments too, along with any related article headlines. So, later, searching Evernote for “car cleaning” would return a post about neuroscience if someone said “car cleaning” in the comments of that post, or if there was a related post about car cleaning listed on the page.

It wasn’t until I started having trouble with Keep that I discovered Evernote’s web clipper lets you clip the fully formatted and illustrated article (but without the surrounding guff). I just need to clip Article.

And I started tagging

Perhaps most importantly, I came back to Evernote with some aspirations around tagging. While using Keep, I’d started adding tags (or ‘labels’, as they’re called in Keep) to my notes.

I started doing this because Keep can’t clip entire articles, so I needed to manually insert words I thought I’d search for in future.

That got me thinking about the value of tags over search, which I’d summarise as follows…

Why is tagging better than text search?

With thousands of notes, keyword searching is inefficient because you’re relying entirely on the words on the page. 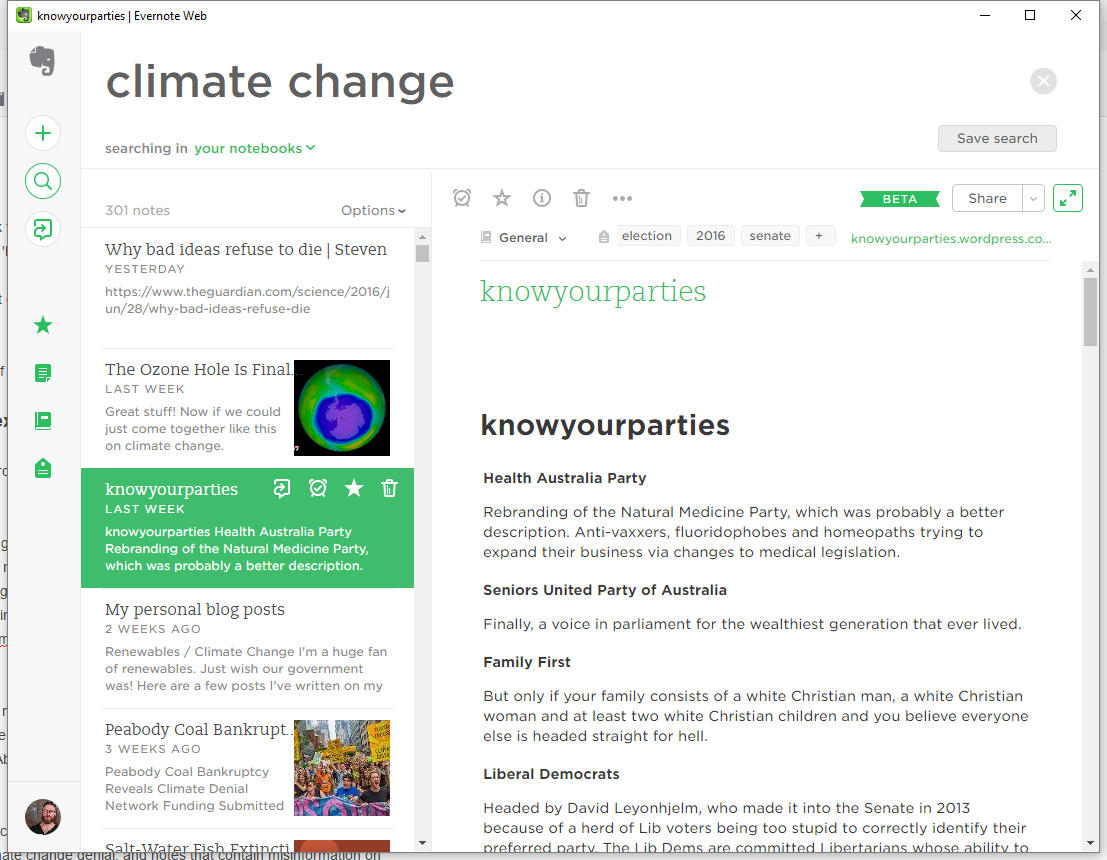 Yes, there’s a bit more work involved in saving each note in the first place, because you have to tag it manually. But I find it adds only an extra 20 seconds or so per note. And it’s definitely worth it in the long run, because I can quickly and easily find notes based on my original assessment of them, rather than on the words they happen to contain.

Why is Evernote better than Google Keep for tagging?

In Evernote, you can use the text search field to: 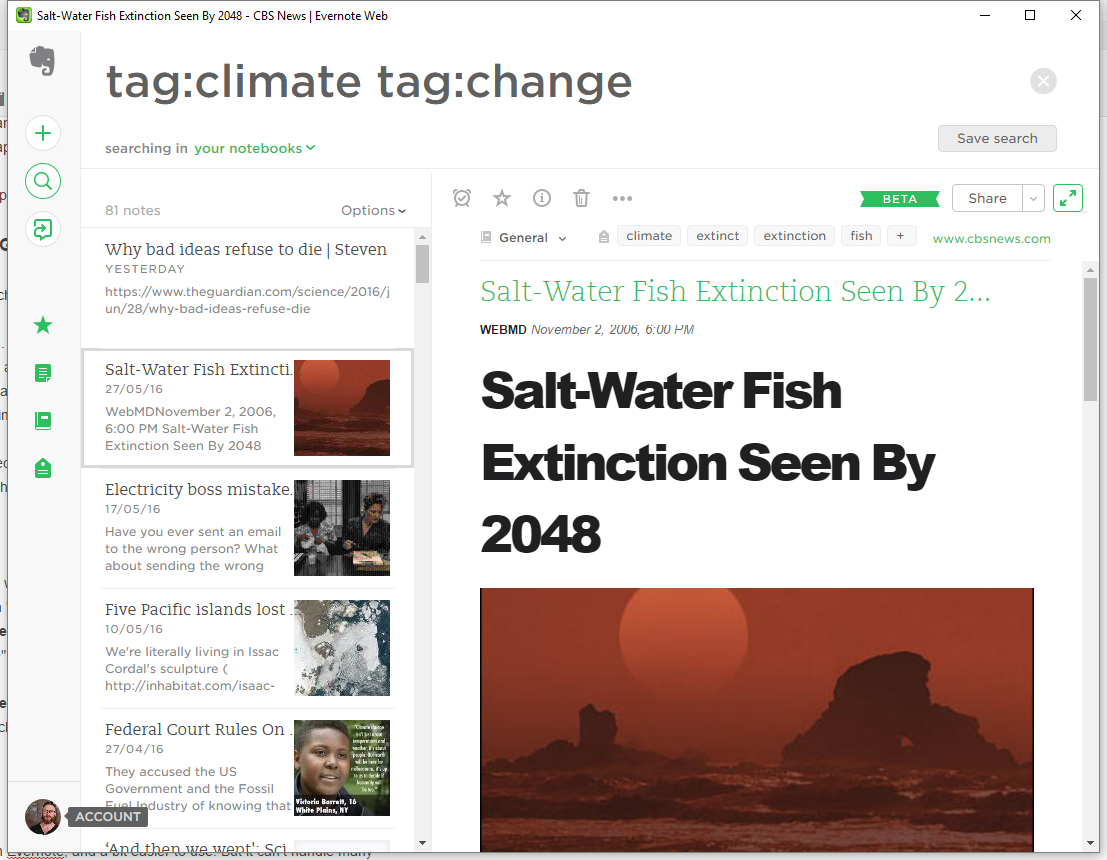 In Google Keep, you can’t do either, because there’s no dedicated tag search syntax, only ordinary text search. Yes, Keep will find tags in its text search, but there’s no way to find only tags.

For example, in Google Keep:

Summary: Google Keep is prettier than Evernote, and a bit easier to use. But it can’t handle many notes and it’s next to useless when it comes to tags.

What do you use?

I’d love to hear your thoughts. What do you use to take notes and bookmark interesting articles? Have you had similar experiences with Evernote and Google Keep?