Contractions in copywriting - A discussion

On Friday, I posted an infographic showing when it’s OK to use certain contractions in your copywriting.

It’s been one of my most popular posts ever, in terms of traffic and comments. Very chuffed!

A couple of comments, in particular, warranted further discussion…

Have you yourself actually used those in writing before?

Content writer, Micky Stuivenberg raised a very good question about the contractions in the outer circle – the least formal ones: 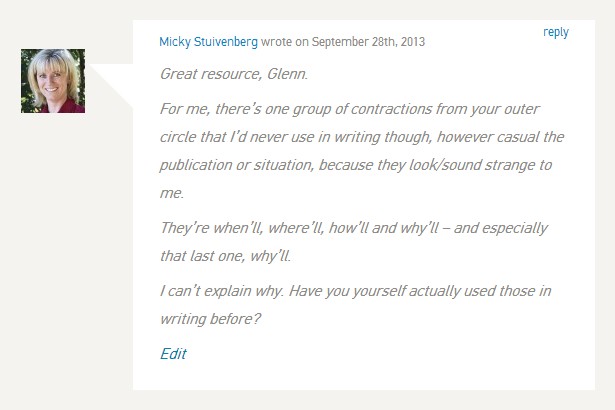 I agree some of the contractions in the outer circle look a little strange. (I actually culled “she’d’hve” and “I’d’ve” from this circle, for that very reason.) I also agree that, in some copy, they’d sound a little strange.

BUT… they do have a time and place. No, as it happens, I haven’t actually used them in copy myself, but I would. In fact, I think the tradie radio ad mentioned in the infographic is the perfect example…

John: Right, I’m off to get the new drop-saw at Smithy’s.

Dave: When’ll you be back?

John: Dunno. Depends how many other toys’re on special. Could be there all week!

I know I’ve used a pretty broad dialect above, but I grew up on a building site (my dad was a builder), and none of it would be out of place. In Australia, at least.

Obviously it’d have to be spoken properly by the voice-over guys. Not too much emphasis on the contractions. They are, after all, used to reduce vocal effort, not increase it. So ” ‘er”, for instance, would be more a schwa (like “eh”) than a long “err”. Unfortunately, a lot of these sorts of ads are delivered terribly.

See what I mean?

Were there any grey areas?

The second comment I wanted to discuss was actually on Google+. Writer, Gary Matthews, asked this: 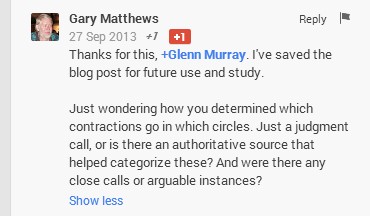